You are here: Home / Australia Scholarships / Cheap IT Master’s Degrees in Australian Universities

As increasingly more jobs around the world are put at risk because of the rise of digital expansion, a quality degree in information technology is a sensible choice for those seeking long-term career security and flexibility. That makes IT Masters Degree ideal, the World Scholarship Forum Team has arranged the IT Masters in Australia and IT Masters Degree in Australia.
Bachelor’s and Master’s IT degrees are amongst the top three most desired qualifications in recruits.
If you’re considering beefing up your employment options with IT credentials, you are spoilt for choice: there are more than thirty universities in Australia currently offering accredited master’s degrees in IT. While that makes it easy to find a competitive degree, the first question you must ask is, which ones provide the best value for money?

All You Need To Know About IT Masters Degree in Australia

Tuition fees are often linked to a university’s ranking. The higher the ranking, the more expensive the degree course is likely to be. This particularly holds true when comparing data about IT degrees at Australian universities from the 2019 Top 500 Academic Ranking of World Universities (Shanghai Ranking), with charged tuition fees.
The graph below analyses the correlation between a university’s ARWU global ranking and their IT degree tuition fees in Australia. 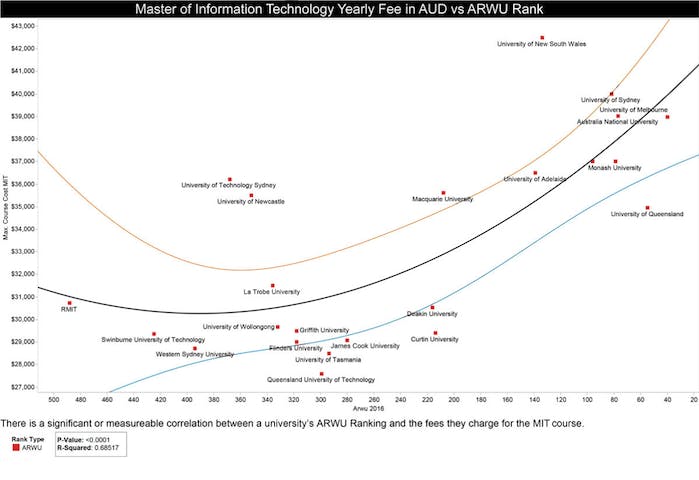 Highlights of the pricing versus ranking comparison

The breakdown of the table data can be split into 3 categories:

1. Universities more expensive than their ranking would suggest:

2. Universities providing tuition fees in accordance with their ranking:

3. Universities charging less than what would be expected given their ranking:

With an annual fee of 42,480 AUD/year, University of New South Wales (UNSW) charges more than any other Australian university for its Postgraduate IT degree – yet the university doesn’t have the highest place in the Shanghai Ranking list. While UNSW might not be viewed as good value for money as other universities, its computer science department ranks extremely well on a number of international rankings. Many people prefer to pay premium dollars for the recognition of graduating with one of the most highly ranked IT degrees in Australia.
For around 3,000 AUD less a year, you could also study at the Australian National University, the University of Sydney or the University of Melbourne – also highly ranked in university rankings and for computer science specifically.

Paying less for a lower ranked but good quality IT degree

For many students, however, the financial burden of studying at one of these universities will far outweigh any benefit that might be gained by graduating with a highly-ranked degree. You might consider universities that still rank in the top 300 globally but which charge at, or well below, the expected fee.

Other factors to consider for your IT Masters Degree in Australia

Rankings and upfront fee costs aren’t the only criteria you might factor into your calculations when choosing where to study your postgraduate computer science degree. Here are a few more considerations that can impact the overall cost of your degree as well as the value you get out of it.

Having smaller classes allows staff to have more one on one time with students and also gives you more opportunity to get to know other students and share knowledge.

Largest IT enrolments (over a thousand):

Some students thrive in city life or want to be close to expats from their home country.

Excellent if you love bright city lights and money for accommodation and fun is no issue.

You’ll be able to live amongst the locals, get plenty of opportunities to improve your English, get everywhere on foot, and make extra savings towards enjoying university life. Read more about tuition fees and living costs in Australia.

Studying for two years in a specific regional area may entitle you to add points on that state’s migration points test. Some states also have specific IT jobs listed on their Skilled Occupation List, which gives applicants who have studied IT in their state further points.
Tasmania, South Australia, Northern Territory, and Western Australian all include IT jobs on their occupation lists for their state’s graduates so studying IT at universities in those states is worth considering if you are looking to work in Australia after graduation. Of these, two-year degrees taught at ARWU ranked universities include:

Making the right choice of IT Masters Degree in Australia

Determining what university will give you the best value for your buck is a juggling act and ultimately comes down to your priorities. If money is no object and you want to graduate with a degree from the most elite computer science university in Australia, UNSW is possibly your best bet.
On the other hand, if you want to combine lower tuition fees with a degree from a well-ranked university that provides you with other advantages such smaller class sizes and migration prospects, then a globally ranked regional university such as the University of Tasmania may be a better choice for you.
Here you have it IT Masters Degree in Australia, hope this answers your questions